The World Judge is a secondary antagonist in the Galatune series. The World Judge is the most technologically advanced ancient artifact ever recovered from the Old Kingdoms. Twelve World Judges operate under the control of the Lyric High Counsel to create and regulate the laws of Lyra itself. The World Judges are connected through an advanced ancient network to nearly all robotic lifeforms, cybernetic systems and technological wonders on the planet. They also have access to ancient databases and enough information to make them effectively omniscient. All World Judges function in terms of absolute law, in a cruel system that does not comprehend forgiveness or mercy. Although the World Judges appear to serve their Lyric masters, secretly they manipulate society, driving the world towards their own dark purposes.

The World Judges are tall humanoid Robots. They are made out of thick metals and appear to have no wires or cords within their metallic surface. The World Judges have long legs and arms and have various shades of black, grey and silver metallic substances all over their body.

The World Judges' feet appear to split at the bottom, giving the appearance of platform heels. Their legs also seem to twist in a strange somewhat organic curl from the knee to the thigh. The World Judges' hips erect outward in a sharp metallic manner. They have sharp extension like blades on their forearms and razor sharp fingers. Their forearms also give the illusion of gauntlets. The World Judges' shoulders are black metallic shoulder pads with spikes on it. Their chest cavities are exposed, revealing some sort of central processor in the core of their frames.

The World Judges' wear rags of some ancient cloths. Their helmet has no face guard, or any protection. Although there is nothing concealing their faces, all that is seen is a black empty shell within the helmet itself. Vacant of any face or face like features.

World Judges are intended to be without inherent personality. Rather, their collective mind is simply a personification of pure legislation. However, as beings of pure law, they tend to seem cruel. They are supposedly unclouded by emotions and do not hesitate to persecute as necessitated by law and order. All twelve of the World Judges reside in the Lawful Citadel of the Lyric High Counsel, where they remain immobile -continuously monitoring and managing the world's legal system and computer networks. However, if a World Judge unit were to be physically assaulted, it's power in battle would be unmatched.

Despite their immense mind, the World Judges seem to be completely without freewill, emotion, and creativity. The World Judges require the guidance of creative minds, and seem to serve their Lyric masters in the High Counsel without question. Although there is no modern record of anyone attempting to fight a World Judge unit in battle, one can only imagine that their unmatched power and intelligence is wholly insurmountable. However, the World Judges hardly, if ever, leave the Citadel. Rather, they dispatch the World Guard to do their bidding, in capturing or battling anyone they deem is a threat to the World Government.

The twelve World Judges utilized by the Lyric High Counsel are the most advanced technology on the planet. They possess unfathomable intelligence and processing power, and connect to almost all other tech on the planet for data streaming and near godlike omniscience. The World Judges operate in a unique AI system, where each individual unit has a discrete mind of its own and is simultaneously part of the larger twelve-mind collective. If needed, the World Judges can override any tech connected to its system for remote control takeover. 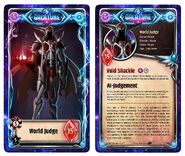 World Judge on poster for a demo night for Galatune

World Judge's character valentine
Add a photo to this gallery
Retrieved from "https://galatune.fandom.com/wiki/World_Judge?oldid=2624"
Community content is available under CC-BY-SA unless otherwise noted.