Starcalibur is a legendary Beamsword made famous from the fable "Blade of the Stars". Believed by most to only exist in legend, it is said that whoever wields this blade is destined to become the rightful ruler of Planet Lyra.  The entire sword is composed of extremely dense hard-light energy from another dimension and is effectively impermeable to all damage. It strikes with explosive force that is disproportionately superior to the amount of force it's user exerts, seemingly defying the laws of physics to create new energy out of nothingness. Starcalibur is also able to project powerful beams of energy that can disintegrate many solid objects. 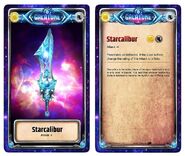 Starcalibur on a poster for game testing

Starcalibur on a poster for Galatune National Championship - Youmacon - Nov 4, 2018

Function: Starcalibur is an attack.

Effects: Starcalibur penetrates all defenses. If the user is Eron, change the rating of this attack to infinity.

Community content is available under CC-BY-SA unless otherwise noted.
Advertisement