Leader of the Dread Pirates

The Dread Pirate Seeve Roberts is a deuteragonist in the Galatune series. Seeve Roberts is a world-renown Human pirate, the leader, and founder of the Dread Pirates. Formally a member of the Lyric Knights, he abandoned his post during a mission to capture lost technology. After witnessing the power of the lost technology, he decided that he’d rather keep the technology for himself, than give more power and might to the World Government. He now leads a rebellious life of adventure, and indulges in pillaging and plunder. He endlessly scours the planet in pursuit of more powerful weapons, and ancient technology. His charisma and outlook on life has inspired many others and drawn them to his cause. He has a small army of like minded followers who reject the World Government in favor of anarchy and piracy. Several large bounties have been placed on his head, but he has enough ancient tech to combat even the World Guards.

Seeve has semi-long black dreadlocks, with dark brown eyes. He has a soul-patch facial hairstyle as well, with black eyebrows. He has a dark brown skin complexion with a strong toned build. He has intricate tattoo designs on his upper left chest, shoulder and arm and his lower right arm and forearm. These tattoos emit a blue neon glow and seem to possess a strange mystical energy about them.

Seeve is shirtless, and wears long black and red striped pants, with grey zip-up boots. The boots also have metallic straps across the foot and shin. Seeve also wears a number of accessories. He wears a light brown belt that is connected to a pouch that is also strapped to his left leg. He also wears a dark brown belt with green grenades attacked to it, over it. Underneath his belts, he seems to wear a long grey cloth, the purpose of which is unknown. He has a bullet chain strapped across his chest and he wears a black necklace with a single bullet attached to it. He also wears a light brown arm band and a matching strap that is also across his chest. Seeve also wears a dark red headband coupled with earrings. He wears an arm guard on his left forearm that has the logo of the Dread Pirates on it.

Seeve tries to maintain a tough dominating exterior to display strength and inspire his followers. He can seem reckless and aggressive at first, but truthfully he has a kind adventurous heart. Deep down, he's also a bit of a hopeless romantic and has a secret collection of poetry. He longs to meet the woman of his dreams and to become the sort of loving father figure that he never had growing up. In the meantime, he often takes a sort of stern fatherly role with his followers, mentoring them in the ways of freedom, piracy, and advanced weaponry. Despite his vast weapons collection and assertive personality, Seeve is in fact rarely an aggressor. He prefers to use his weapons as deterrents, but if pushed he will do anything to protect the freedom of his followers.

Seeve has a vast arsenal of ancient weapons from the Old Kingdoms that he's collected over the years. He and his army of rebels are armed well enough to effectively resist the World Government. His greatest weapon however, is the Star Enscriber. 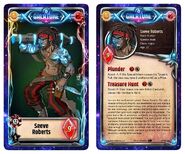 Chibi Seeve Roberts
Add a photo to this gallery
Retrieved from "https://galatune.fandom.com/wiki/Seeve_Roberts?oldid=1813"
Community content is available under CC-BY-SA unless otherwise noted.