Princess Violeta Crown is the main female protagonist of the Galatune series. Violeta is the beloved Lyric Princess of the planet Lyra. She is the eldest of twelve sister princesses, and is to inherit the throne upon her 21st birthday to become the next supreme ruler of all of Lyra as the next Queen. As is tradition, she held a Lovers Masquerade inviting suitors from across the planet seeking her prince. However, the Azure Eye rebel group managed to overpower her robot guards using an unknown ancient technology. The Azure Eye took her prisoner, but she outwitted the terrorist group and used their own technology against them, in order to escape. She now fights to discover the true intentions of the Azure Eye and to destroy them with her own hands.

Violeta has long curvy gold hair with emerald green eyes. She has long pointy ears and a light peach skin complexion. She's slightly taller than her friend Eron, and has a skinny hourglass figure.

She wears white skin tight ceremonial clothes with a complimentary gown and armor, all of which have intricate Lyric symbols and designs running through it. The gown consists of two layers, a first one that is all white and gives the impression of wings spreading out, with the tips colored with a tint of blue. The other is shorter, elegant and transparent, hovering over the wings. She also has a tight white corset and has two short shoulder sleeves. She also wears a white neck guard. Her armor consists of two thigh high boots with heels, two arm guards, shoulder pads and gloves.  Her belt has four straps attached to it, and her crown has two blue energy wings that light up whenever she utilizes her mystical energy or casts a spell. She wears the Lyric Royal Crest on her chest and has a matching set of earrings.

Violeta firmly believes in upholding honor and tradition, and strives to continue the path for Lyra set by her ancestors. She believes that the World Government is a perfect governing system that maintains planet-wide order and peace. She perpetuates the popular perspective that the greatest evils in the kingdom come from those who oppose the World Government and traditional values. She considers the Azure Eye a group of barbaric terrorists and believes the Notre to be akin to demons.

Despite her noble intentions, she is tragically out of touch with the reality of the common citizen. She has never left the planet capital city, Crown, where she was born.  However, she has long held a secret desire to reject her royal heritage and go out into the world as a nameless adventurer.

Violeta has a bit of an obsessed hobby studying ancient technologies. She loves the mystery and allure of the lost tech, and believes that the recovery of these lost tools is pivotal to the continued prosperity of Lyra.

Violeta has been groomed since birth to embody core Lyric ideology and has a diverse set of knowledge and skills. 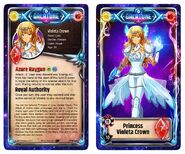 Princess Violeat with World Judge on a poster for Matsuricon 2017

Princess Violet with a few of her sisters
Add a photo to this gallery
Retrieved from "https://galatune.fandom.com/wiki/Princess_Violeta_Crown?oldid=2003"
Community content is available under CC-BY-SA unless otherwise noted.