Cult of Death and the Sun

Ancient Secrets of the Old Ways

Ontaña Sol is a secondary antagonist in the Galatune series. Ontaña Sol is a member of the now nearly extinct Lagartan race. The Lagartan people once ruled a savage empire that worshiped Death and the Sun. Now, they are a peaceful people integrated into mainstream Lyric society. However, there are some Lagartans, like Ontaña, who romanticize their lost culture and still practice their ancient ways in secret. Ontaña caters to such clients, providing cursed relics, books on blood rituals, and the forbidden delicacy of Human meats. Although she's slaughtered countless Humans, murder crimes against Humans are poorly enforced and business is good. 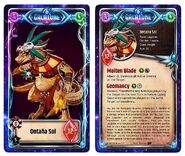 Ontaña Sol's character valentine
Add a photo to this gallery
Retrieved from "https://galatune.fandom.com/wiki/Onta%C3%B1a_Sol?oldid=2590"
Community content is available under CC-BY-SA unless otherwise noted.