Notre Viz is a flat character in the Galatune series. Notre Viz was seized by the World Government immediately after her birth. Lyric scientists and mages have since subjected her to countless cruel experimentation, attempting to better understand the mysteries of the Notre. Her one-of-a-kind Notre Curse grants her insight into “the truth of the soul”. She can see deep into the subconscious mind to determine if someone is lying. However, her curse also makes it impossible for her to lie in any situation. The World Government uses Notre Viz in high profile court cases. Anyone who she discovers lying in court is disintegrated by the powerful Visorbeam which is permanently mounted over her eyes.

Viz has a deformed and disproportionate body. This is however, a side effect of being born a Notre, who are born with a wide variety of deformities. Viz is short, and her head is large and chubby. Her hands and legs are very small and stub-like. She has long Lyric ears and the deep blue eyes that all Notre possess. She has light skin complexion and vibrant pink hair which she wears in double pigtails.

Viz wears Lyric courtly ceremonial attire, as she is often brought forth and used in the Lyric trials as a lie detector. Viz wears two long pure white gowns, one that is a long dress that goes down to her shins and a long white shawl over it. The shawl compliments the dress and also goes slightly lower than it. The shawl resembles pair of wings, with two long layers. The first layer extends low to the ground and has a red outlining, the second layer gives the illusion of feathers and has a yellow outlining. The shawl also has two ring extension-like accessories hanging from the second layer. The shawl comes together neatly at Viz's chest, with a long collar around her neck and has a red ribbon with a blue button in the middle. The shawl also has a typical long flat tie and has Lyric ceremonial symbols and designs running through both the tie and the upper portions of the shawl. The tie, collar and upper portion of the shawl all have a red outline, matching the first layer. The shawl also has two long protruding white ribbon-wings from the upper portion.Viz's arms have small triangular wings dangling from her sleeves, she wears red leggings that compliment her gown with white slippers. She also wears loop earrings.

Viz's most noticeable feature however, is her large red visor that's mounted on her face and covers her eyes. This visor has been wired to her brain and has mounts that can be seen on the sides of her face above her ears, and below her eyes on her cheekbones.

A lifetime of experimentation has left Notre Viz deeply psychologically injured. She has become the perfect puppet for the World Government's purposes. She has extreme difficulty understanding and expressing basic emotions. Although she is rather intelligent and observant, she interprets the world with a sort of detached sterile cynicism. Her people skills are very poor, and she rarely speaks, unless compelled to do so by her Curse of Intention.

Notre Viz is a powerful puppet of the World Government. Even without her Visorbeam, the Aberration Index rates her a threat level of 100, an Imp Level Threat with enough power to single-handedly destroy an entire village. 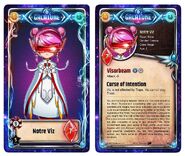 Notre Viz with old card design and stats
Add a photo to this gallery
Retrieved from "https://galatune.fandom.com/wiki/Notre_Viz?oldid=2615"
Community content is available under CC-BY-SA unless otherwise noted.