Notre Lux is a symbolic character in the Galatune series. Notre Lux is by far the most powerful Notre in all of history. His Notre Curse of Chronos allows him to freely manipulate time and space. Since Notre Lux can choose to break the very laws of reality whenever it pleases him, any fight against Lux is really just an illusion for the sake of his own entertainment. Notre Lux travels between all the great ages of history, acting like a sort of cosmic tourist. Although the society of the current age treats all other Notre as monsters, they hold Notre Lux in exceptional esteem. Lux is regarded as a great immortal hero. His likeness appears across the pages of history, and each time he seems to portend the coming of momentous change. The Royal Family throughout the ages has welcomed him as an advisor to the court on several occasions. However, despite his incredible power, even he is unsure if his actions can truly change destiny.

Lux is tall and skinny and has a light peach skin complexion and is considered to be quite handsome. He has short purple spiky hair that is stylized and combed sideways; and has heterochromatic eyes, with his right being the Notres' signature deep blue eye and his left being a vibrant orange. He also has two red diamond-shaped birth marks, located directly under his eyes.

Lux wears a grayish-purple suit with white pinstripes. He wears a white collar shirt underneath his jacket, with a black business tie. Lux also wears a pair of black business shoes that match his tie. Lux's most noticeable feature is his long brown cape. Lux wears a cape with intricate designs, with yellow and blue charms that are embedded into the cape. There are yellow marble-like gems located at the bottom of the cape, as well as blue marble-like gems at the top. On the inner portions of the cape appears to be a living universe or galaxy, as if it the cape itself literally contains another dimension.

Notre Lux is relentlessly positive, upbeat, and encouraging. His unique Curse of Chronos has largely detached him from concerning himself with much of anything. He uses his phenomenal powers to simply tour the multiverse, experiencing and learning whatever he can. Whether he does this to increase his already boundless knowledge or if it's merely out of boredom is unknown. He typically avoids interfering with the affairs of mortals, although there are strange occasions where he tosses caution to the wind and has some fun drastically altering reality. Still, beneath his playful surface, Notre Lux is a deeply tortured soul. He is troubled with knowledge beyond mortal understanding, forced by his immortality to bear witness to the story of existence, while forever pondering the true meaning of it all.

Notre Lux will occasionally humor himself by pretending to engage in serious battles against mortals. In such conflicts, Lux prefers to avoid using his Curse of Chronos and instead fights primarily with his weapon of choice, the mysterious Eternal Lantern. For the sake of good sportsmanship, Lux always chooses to shift his own power level to match that of his opponent, so that they can have a semblance of a fair fight. Lux is so dedicated to this principle, that he purposely allows for the possibility of his own defeat, despite his true power being wholly insurmountable by mortals. If defeated in an honest battle, Lux plays the role of the loser and lets history continue in that direction, restraining his ability to alter reality at will. Since Lux cannot truly be defeated, and since his existence is nearly boundless, he cares relatively little about winning or losing any conflict regardless of its impact.

Notre Lux has unfathomable power, coded as a Deity Level Threat to all reality with an unmatched Aberration Index rating over 9000. However, even without using his Curse of Chronos at all, he is more than a match for anyone on the planet. 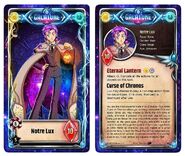 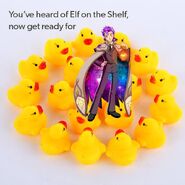 Notre Lux in a silly meme
Add a photo to this gallery
Retrieved from "https://galatune.fandom.com/wiki/Notre_Lux?oldid=1999"
Community content is available under CC-BY-SA unless otherwise noted.