Founder of the Azure Eye

Powerful Spells
Notre Fate (Birth name Yago Gwendi) serves as the main antagonist of the Galatune series. Notre Fate is the infamous leader of the terrorist organization and rebel group known as the Azure Eye. Fate is a Notre, a half-Human, half-Lyric hybrid of incredible power. Fate was born into a society that treats Notre like abhorrent cursed monsters. Although most citizens believe in the Utopian society created by the United World Government, Fate sees a darker truth. He's witnessed countless horrific acts committed by the World Government against the minority groups of Lyra.

Fate is a tall lean man, with a small build. His hair is long and wavy, and is a dark shade of black with one noticeable white hair bang. Fate has a pale skin complexion and his left ear is a typical pointed Lyric ear while his right is more rounded like that of a Human. His one remaining eye is a deep blue.

Fate wears dark shades of color, with a number of accessories. He wears tinted blue boots, a long dark robe that drops to his feet, and wears a dark grayish sleeveless shirt over it; that's boarder is outlined in yellow. The robe has two large black belts attached to it, which has yellow clips, one on each side of him and a strange black thorny branch design at the bottom. A long yellow stripe runs across the bottom of the robe as well. His sleeveless shirt has two black belts on it that holds a long white ceremonial tie in place. The tie has a yellow boarder and the Azure Eye's emblem towards the bottom. He wears two long black arm sleeves, one on each arm with two black belts on each arm above them. The sleeves end just at the wrists and are outlined in yellow. The sleeves also contain a zipper at the forearms, that can open the sleeves if he so desired. He also wears black finger-less strap on gloves. Fate also wears a short black cape that's bottom has been torn up. The boarder of which is also outlined in yellow. The cape pops up behind his head, as a stylized collar. The collar has two sharp pointed ends and is outlined in yellow on its boarder. The cape is attached to him by a belt that runs across his chest. He wears a black necklace with a ring attached to it and a black collar belt tightly around his neck. He also wears a pair of small black hoop shaped earrings.

However, his most noticeable feature is his black eye patch, which has a hole cut in the center; revealing the Star Crystal lodged inside his right eye.

Although Notre Fate dreams of the noble causes of justice and freedom, he and his followers are radical, violent extremists. He is a firm believer that the end justifies the means and will do absolutely anything to further his cause. Notre Fate seems especially obsessed with trying to change the future. Notre Fate is haunted by a dark terrible vision of the future that he will not disclose with anyone, but the greatest purpose of the Azure Eye is to change events enough to alter history and prevent this secret terrible vision from coming true. However, despite his best efforts to change or decipher them, it is unknown if his actions effectively changed the course of fate or ensure it.

Notre Fate is a Notre, a half-Human, half-Lyric who grew up in a society where his kind is treated like abhorrent monsters, wild beasts, and soul-less tools. Fate's mother was a High standing Lyric, Duchess Gwendi and his father was her Human servant. His parents did well to hide their relationship for many years against a society that would sentence them both to death for this crime. However, when Fate's mother became pregnant with him, the couple became bitter and violent towards one another. It was his father's wish that the cursed baby should be killed, but Fate's mother instead decided to keep the child and have it raised in secret by a trusted servant in the distant wilderness. Never reaching an agreement, Fate's mother eventually publicly accused Fate's father for coming onto her and had him sentenced to death -all while asserting her false innocence.

Notre Fate was raised in isolation by a kind seemingly Human elderly woman, named Terla Riversong. Terla was in-fact a Notre in hiding, physically identical to Humans, who was a trusted friend to Fate's mother. Fate grew up with a love for nature and animals and spent long hours in the woods every day. However, he was in many ways a prisoner, forbidden to ever speak to any Human or Lyric so long as he lived. Eventually, Fate started having nightmares about Robots burning down his home and killing his beloved Terla. The nightmare grew more intense and vivid, but Terla comforted him and dismissed this as nightmares. Soon after however, the nightmare came true. Robot World Guards were sent to execute Terla and Fate after the truth of Fate's mother's crimes came to light. Fate managed to escape the Robots by using the memory of his "nightmares" to know exactly how to escape. This was the first instance where Fate discovered his Notre Curse, the unique ability to see the future for people who have touched his skin.

As the years went on, Fate did in fact witness countless more tragedies, both in person and through his future vision. Fate saw the world as a dark evil place where his kind were persecuted mercilessly, and where the ruling Lyrics suppressed all other races beneath them. Thus, Notre Fate made it his personal mission to save his fellow Notre, destroy the United World Government, and bring freedom and true justice to all races. In a grand poetic gesture, Fate gouged out his own eye before his followers and pledged to create a vision of the future where all people are free from Lyric oppression. From that day forth, Fate and his followers came to be known as the Azure Eye.

Notre Fate is a brilliant tactician and masterful magician. Though it's unknown if his brilliance in strategy is in fact from his own skills as a strategist or if he makes his decisions based off of the future that he can foresee. His powerful shadow and flame magics are second to none. Rated a Demon Level Threat at 653 on the Aberration Index, Fate is one of the most powerful Notre. 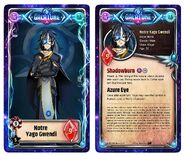 Notre Fate on a poster for Wittcon

Notre Fate on a poster for Kickstarter - Cosmic Deception
Add a photo to this gallery
Retrieved from "https://galatune.fandom.com/wiki/Notre_Fate?oldid=2618"
Community content is available under CC-BY-SA unless otherwise noted.