Dragons are strange beasts of incredible, otherworldly power; power that people would do anything to possess, power that could promise hope, freedom, vengeance, or destruction. Once she was a proud and vicious predator driven like all dragons to conquer and subjugate. However, when a brutal battle left her amnesic and near death, a hunter known as Fore rescued you and raised you as his own daughter. Fore taught you how to curb your natural instincts and raised you to be kind, heroic, and fierce. Through psychological and physical trauma, Fore conditioned her with a hatred of the World Government and convinced her that she was not a dragon, but instead his Notre child. After her father figure mysteriously disappeared, she found a new family with a group of relic raiders. Now she and her friends adventure through the Rhyme region, seeking treasure and facing rival raiders. 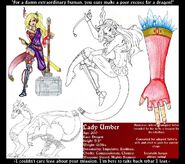 First design of Notre Cauda Lady Umber
Add a photo to this gallery
Retrieved from "https://galatune.fandom.com/wiki/Notre_Cauda_Lady_Umber?oldid=2628"
Community content is available under CC-BY-SA unless otherwise noted.