Tired of being on the bottom of the food chain, the three Mufen brothers Mee-Ooo, Buttercream, and Ladykiller trained in self-defense under the beastmaster Notre Aper. Each of the brothers dedicated long hours to mastering disciplines never before explored by Mufen kind. Mee-Ooo donned the forbidden ancient visorbeam and practiced the art of marksmanship. Buttercream dove deep into the dark and mysterious ways of magic. Their leader, Ladykiller chose the path of the warrior and now wields the mighty sword “Blisterbottom”. However, the Mufen brothers are tragically unaware how adorable and non-threatening they still are.

The Mufen Troupe consists of three male 7 year old Mufen. The Troupe's leader, LadyKiller wears a royal guard knight's armor set custom-designed specifically for him, and wields the likewise customized mufen sword "Blisterbottom". LadyKiller is the most common breed of mufen, with blonde fur and blue eyes. Mee-Ooo is a rare breed of mufen found only in the jungles of Calando, known for their bright green fur and purple eyes. Mee-Ooo is outfitted with an ancient visorbeam weapon surgically mounted over his eyes and wired into his brain. He also wears a custom-tailored aristocratic lab technician's coat. Buttercream is a domestic breed of mufen prized for their unique red fur, yellow eyes, and affectionate personalities. Buttercream wears a hand stitched wizard costume inspired by traditional lyric festivals, with a purple cap, matching purple cape, baggy white trousers, and baggy yellow top. Buttercream wields a toy wand, enhanced with star crystal dust and ironically capable of producing minor spells despite its original intent as a harmless children's toy.

The Mufen Troupe fights desperately to be taken seriously, despite being adorable relatively-harmless mufen. LadyKiller, once the pet of a royal knight, is brash, brave, and the most aggressive member of the Troupe. LadyKiller is easily threatened and is always looking for a chance to fight and test his mettle. Mee-Ooo, once the pet of a lab technician from the Mindful Citadel, is the most inquisitive member of the team. Mee-Ooo is highly curious and eager to explore, but is somewhat clumsy and often gets himself and the Troupe into needless danger. Buttercream, the red mufen, is an affectionate sweetheart who constantly finds his adorable loving nature at odds with his desire to earn respect and become more than a spoiled pet. 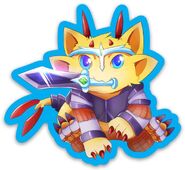 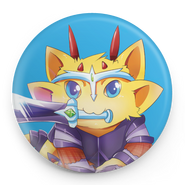 Ladykiller on a poster for Galatune being funed with Kickstarter

Buttercream on a poster of Halloween 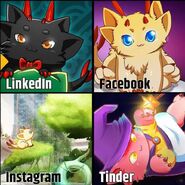 Buttercream on a silly meme

Ladykiller on a poster for Origins Game Fair
Add a photo to this gallery
Retrieved from "https://galatune.fandom.com/wiki/Mufen_Troupe?oldid=2291"
Community content is available under CC-BY-SA unless otherwise noted.