Merendie Sailbloom is a supporting antagonist of the Galatune series. Merendie Sailbloom is the Second-In-Command of the Azure Eye, under Notre Yago. Merendie leads the Azure Eye's fierce army, and she is obsessed with and dedicated to the complete destruction of the Lyric World Government. Merendie's notority in battle is all but legendary and her combat skills are likewise considered legendary. She is often referred to or known as the "Fatal Flower", due to her astonishing beauty and her unmatched tactical prowess, as well as her cruelty in both warfare and in politics. Her unsettling nature is the product of deep seeded inner turmoil. Merendie's former, and secret, lover was put to death by public exectution, and accused of being a monstrous Notre who fed on children. Merendie adored and trusted her love with all her being, and she sees every battle as a physical manfestation of the controversy surrounding his trial and death; a battle in which she desperately fights to prove his innocence. 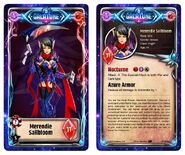 Merendie Sailbloom's character valentine
Add a photo to this gallery
Retrieved from "https://galatune.fandom.com/wiki/Merendie_Sailbloom?oldid=2380"
Community content is available under CC-BY-SA unless otherwise noted.