Jay Skyrunner is a deuteragonist in the Galatune series. Jay is an Oiseauti, a birdlike race that is now nearly extinct. Jay is a legendary archer and an infamous poet. The Oiseauti races’ history and rich culture is largely oppressed by the Lyric World Government. Like all beastling races on Lyra, the Oiseauti are simply considered “Lyric Citizens”, without any distinction or reference to their unique cultural heritage. Jay has a great love for the arts of the Oiseauti Old Kingdom, and fights to keep his lost culture alive through his poetry and theatrical demeanor. The World Government considers Jay’s writings to be treacherous, and full of “malicious propaganda”, forcing Jay to live in obscurity. Regardless, Jay continues to create his forbidden books and banned writings. Despite the attempts of the World Government to keep his writings out of the hands of others, Jay’s books are cherished by collectors and sell for high prices on the Black Market.

Jay is a tall individual with many bird features. He stands bipedal and has long talon-like legs. He is completely covered with feathers that appear to be well groomed. He has big golden eyes with red eyebrows and a large golden beak. Jay's feathers are predominately a vibrant light green, with long red stripes running down his arms and the sides of his face. His torso and face however, are covered with white feathers. These white feathers also encompass the areas surrounding his eyes. However, he also has green feathers in-between his eyes and, following down his face to his beak. He has two wings and a tail that are used for flying, both his wings and his tail are vibrant green with the tips of his feathers being red.

He wears light brown boots on his talons, which have a black belt wrapped around the shin to keep them on tight and he has two layers of theatrical clothes. The first is a white collar shirt that he wears under a larger shirt. The larger shirt is a darker shade of green with yellow stripes at the bottom and down the side of his shoulders; it also has several layers of strings that he can adjust to tighten it or loosen it on himself, located on his chest. He wears a tight belt across his waste and another holding his quiver across his chest. He wears a flamboyant musketeer hat that is the same shade of dark green as his shirt with a long yellow stripe running across the brim. It also has a large blue feather protruding out of it, and another white one that is behind the blue feather. He also wears one brown glove on his right hand.

Jay has the air of a Shakespearean actor, charming, poetic, philosophic, and at times a bit dramatic. Although a wanted criminal of the World Government, he ravishes in the praise of his adoring fans and takes little effort to disguise his public appearances. Luckily for him, flight technologies are exceptionally rare on Lyra, so when things get rough he can almost always take flight and escape with ease.  Should Jay be forced into a battle, he often tends to showboat, amusing himself with elaborate trick-shots.

As an Oiseauti, Jay has a number of abilities that are natural to his kind. However, though he relies on his Oiseauti skills to avoid capture, he uses weapons rather than abilities when it comes to combat. 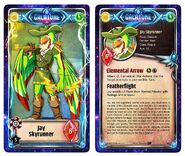 Jay Skyrunner with old card design and stats
Add a photo to this gallery
Retrieved from "https://galatune.fandom.com/wiki/Jay_Skyrunner?oldid=2621"
Community content is available under CC-BY-SA unless otherwise noted.