Imoogi is a secondary antagonist in the Galatune series. She is a fierce and terrifying Dragon as well as one of the oldest living beings on Lyra. Throughout her lifetime, she has witnessed the rise of the United Lyric World Government, the fall of the Old Kingdoms, and the birth of the first Notre. Brave champions throughout the ages have sought her secret wisdom, and vast knowledge, but she cares little for the plights of lesser creatures. She has a feral heart governed solely by the laws of nature itself. She believes that the strong devour the weak and she increases her own power by slaying and eating her fellow Dragons.

Imoogi is shown here in one of her favorite forms, a half-Lyric half-Dragon form. As such she has  features and characteristics from both forms combined together.  She has long straight white hair, with hard purple scales acting like armor around her body and dark tinted Lyric skin. She has orange wild eyes, with dark purple lips and dragon scales on both sides of her face. She also has long elegant Lyric ears with earrings and two long antlers, and she resides in a elegant feminine hourglass figure.

Imoogi has a long tail with the inner portion revealing the soft dark Lyric skin, and the outer portion protected by her purple scales. The tip has long white hair, and a bandage wrapped around it. Imoogi's legs are comprised of her dragonic form, featuring her long Dragon legs, with sharp talons, that give the impression of thigh high boots, and high heels. Her pelvis and the sides of her torso are also comprised of her purple dragonic scales. Her shoulders are likewise comprised of her dragonic scales giving the image of shoulder pads and her arms and hands also consist of these features. Her head, neck, chest and stomach are all comprised of her dark Lyric skin. Imoogi also has a pair of traditional dragonic wings, with the outer portion consisting of the same purple scales as the rest of her body and the inner portion consisting of a light pink pigmentation. The wings have a pointed spike or bone protruding out from the top as well.

Imoogi wears a few accessories and items of clothing. She wears a white piece of cloth around her neck and breast, with a transparent elegant gown that flows beneath it. She also wears gems and jewels attach to a string across her chest and wears dragonic rings and emblems attached to her cloth. Imoogi also wears a metallic ankle bracelet on her left ankle, with two metallic leg garters, one on each leg. Imoogi also wears a metallic wrist guard on her right wrist and a metallic arm band on her left arm. She also has two metallic rings, one on her left hand's middle finger and the other on her right hand's index finger. Finally, she has a number of energy beam-like aura's rotating around her.

Imoogi's Celestial form is massive and long,and greatly resembles a serpentine like Dragon. She has a turquoise tongue with glowing orange eyes that seem to be completely absent of the iris and pupil. Rather the entire sclera is orange and emits a light orange glow.

Imoogi has a thin but long snake like body with four legs, two which act like hind legs and two front legs which also seem to function as hands. Each leg has razor sharp talons, coupled with three fingers and opposable thumbs. Her body consists of strong plated purple scales, on her sides and back. Some portions of her body also seem to have stronger and thicker scales such as her knees and her shoulders. Her belly consists of smooth pink ventral scales that covers the underside of her body. She has sharp white hairy spike like protrusions (the same color as her hair in her Hybrid form) that stars from her head and follows her spine all the way to her tail. She also has flowy white hair from the back of her head, a small white goatee and white hair flowing from her elbows and the back of her shins. Imoogi has a long snout with two brown antlers extending from the back of her head. She also has two long white whiskers jutting from below her nostrils.

Imoogi wears very little in this form, as she doesn't need any physical armor for protection, but she does wear a few accessories. Imoogi wears two metallic bands on her antlers, with a deep blue marble stone in each of them. She also wears metallic wristbands on both her wrists and her ankles. Imoogi also wears a metallic ring on her middle toe on her left foot, and another metallic ring on her index finger on her right hand. Finally, she wears a metallic septum nose ring and has a strange metallic chest guard with a red undercover and a light blue crystal in the center.

Imoogi is cold, fierce, heartless, and impish. She enjoys consuming powerful warriors and toying with her prey, and has devised a cruel method for doing just that. She often takes the form of a lovely damsel in distress to lure unsuspecting warriors into cat-and-mouse quests to "slay the dragon". Although she has no real interest in romance, she entertains herself by beguiling men with her arousing facade. She never tires of the look of terror on a  warrior's face when he discovers that the woman of his dreams is in fact the terrible Dragon behind his quest.

She also has a penchant for irony and poetic justice. When hunting her fellow Dragons, she often begins the hunt by taking the form of one of the fallen warriors who once sought to slay her.

Like all Dragons, Imoogi is capable of a vast majority of capabilities. Including energy based attacks and countless unique abilities that are unknown. 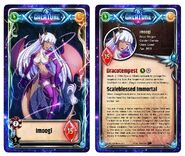 Cose up of Imoogi cake

Close up of Imoogi cake - head

Side view of Imoogi cake head

Close up of Imoogi statue - hand

Close up of Imoogi statue - foot

Close up of Imoogi statue - scales

Close up of Imoogi statue - head 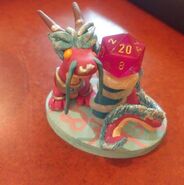 Imoogi in her Celestial form with Kickstarter date - July 1

Imoogi in her Celestial form with funded with Kickstarter

Imoogi's character valentine
Add a photo to this gallery
Retrieved from "https://galatune.fandom.com/wiki/Imoogi?oldid=2612"
Community content is available under CC-BY-SA unless otherwise noted.