The Edge of Infinity is a mystical sword of unparalleled power, that exists on the very edge of comprehension itself. The Edge of Infinity resides simultaneously in several planes of otherworldly existences. In order to wield such a weapon (without the wielder losing their mind) the wielder must be able to conceptualize its power in relatable terms. While it's potential power is truly limitless, it will only manifest a level of power that it's wielder can comprehend. Thus, this blade is significantly stronger in the hands of an experienced warrior with a strong mind than in the hands of a common fighter. 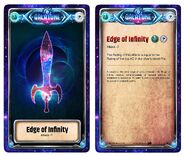 Function: Edge of Infinity is an attack.

Community content is available under CC-BY-SA unless otherwise noted.
Advertisement