Start a Wiki
The Disintegration Cannon is a massive super weapon that was used to protect the Lyric Royal Family, in times of war. This tremendously powerful but ancient cannon is so powerful that it effectively is able to melt right through energy barriers and force shields. The destructive nature and power of this weapon is what allows the World Government to reign supreme. However, now the cannon is used as a deterrent. The reasons as to why is unknown, but many speculate that the destructive power of the cannon could destroy Lyra itself, if used too often. 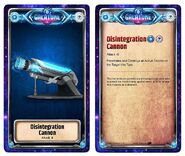 Function: Disintegration Cannon is an attack.

Effects: Disintegration Cannon penetrates defenses and destroys all active shields on the target on this turn.

Retrieved from "https://galatune.fandom.com/wiki/Disintegration_Cannon?oldid=2405"
Community content is available under CC-BY-SA unless otherwise noted.