Start a Wiki
The Curse Sword is an evil and corrupt blade that was created out of malicious desires and pure hatred. The blade itself was forged in the blood of two dozen innocent Notre and was made for the sole purpose of hunting other undesirables down and killing them. Due to the nature of its creation, many fear the weapon and would gladly pass it up. However, those who would wield this profane blade have their hearts filled with debilitating madness and hatred. 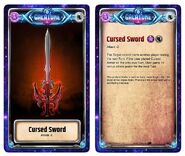 Function: Cursed Sword is an attack.

Effects: Cursed Sword the target cannot harm another player during the next turn. If the user played Cursed Armor on the previous turn, triple the rating of this attack.

Retrieved from "https://galatune.fandom.com/wiki/Cursed_Sword?oldid=2390"
Community content is available under CC-BY-SA unless otherwise noted.