Buddy is a deuteragonist in the Galatune series. Buddy is a World Guard model Robot, one of the hundreds of ancient robotic enforcers used by the United World Government. All World Guards possess technology and fighting abilities far superior to even the mightiest of warriors, allowing the World Government to maintain absolute global authority over its citizens. World Guards are connected to an ancient computer system which is programmed and managed by the World Judges. However, for reasons unknown, Buddy has been disconnected from this network and now experiences a unique sense of self-awareness. He's found companionship with the enslaved Notre Viz, who likewise struggles with self-identity. Notre Viz refers to this unique Robot as "Buddy", but in the eyes of everyone else he is merely a soulless World Guard.

Buddy towers over most others and is comprised of an ancient metallic substance that acts like an impregnable armor. His metal body is layered with different shades of grey and white and a green neon light emits from his legs, arms, shoulders, rib cage and head. He has the Lyric Royal Crest on his chest and forearms. He has a speaker located on his face where his mouth would be and he has two long wings that extend beyond his head, each of which also has a green neon light glowing from the tips. His hands have three holes in the palm where he is able to fire his laser nets and rays.

Buddy has somehow broken free from the system controlled by the World Judges and as such has freed himself from their orders. With his new found independent thought, Buddy has found himself enamored by the mysterious concept of life; and he has set out to better understand creation itself. In his quest he has adopted an appreciation for the beauty and mysteriousness of nature itself.

As a former World Guard, Buddy has all of their abilities and weapons at his disposal. Buddy's greatest strength however, is perhaps his capacity for emotion and creativity, a unique trait that even the World Judges do not possess. 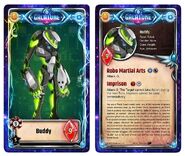 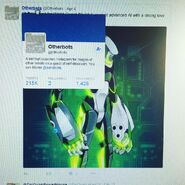 Buddy being tweeted by a bot made to look for images of robots
Add a photo to this gallery
Retrieved from "https://galatune.fandom.com/wiki/Buddy?oldid=1955"
Community content is available under CC-BY-SA unless otherwise noted.