Magical Abilities
Akimi is an enchanted Pumpkin creature from another dimension and plane of existence. Akimi was once an ordinary Pumpkin, growing in the Pumpkin Patch of a terrible sorceress. The sorceress relied on her Pumpkin Patch to grow materials for her potions and so she required a guardian to watch over and protect her materials. The sorceress brought a Scarecrow to life with a dark curse that enslaved his will and forced him into unquestionable servitude. The sorceress was cruel to the hard-working Scarecrow. Helpless, Akimi witnessed his suffering and desperately longed to ease his burdens. Over time, Akimi's compassion grew into an extraordinary love and by the power of this love alone, Akimi miraculously took the form of a young maiden. Now, Akimi works tirelessly to impress her Scarecrow senpai, she assists in guarding the Pumpkin Patch while secretly looking for a way to free him and break the sorceress's curse.

They say that a wicked sorceress rules these woods (and she did, until Akimi totally kicked her butt). Now, this magical garden cottage is home to a one-of-a-kind pumpkin gal - Oh, and her trusty Mufen too! No one really knows how this ordinary produce became such a force of nature, but she is determined to find out! That mean old witch was building an army of vegetable minions, but Akimi squished her squash, crushed her carrots, and sent her packing! That's only the start of her origin story though. She just know there's a reason for her to be here, and with Hope by her side, nothing's gonna hold her back!

The second Champion card of Akimi

Akimi on a poster for KABO D20 Duel Tourney

Akimi on poster for KABO D20

Akimi with Hope on a poster for Tournament de Lux 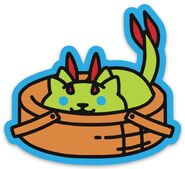 Akimi on a poster for Dawn of Borrowed Light Kabocha Tourny
Community content is available under CC-BY-SA unless otherwise noted.
Advertisement